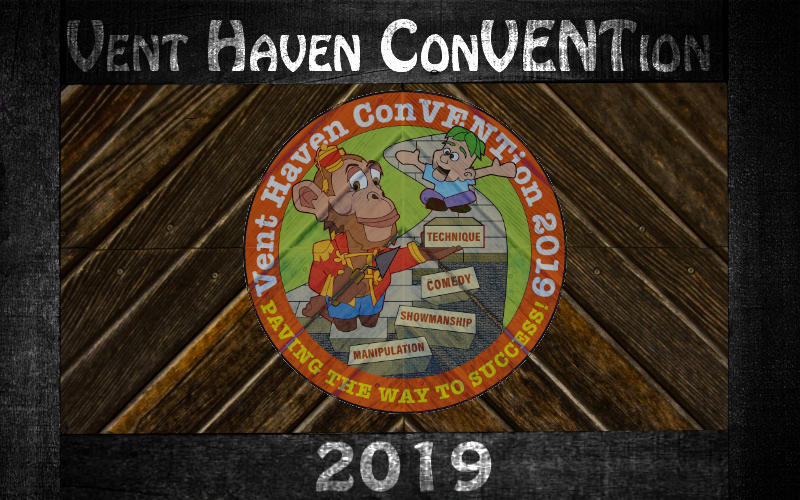 Lots of Red Dotters … this was the hallmark of the 2019 convention with a record number of 125 people coming to the Vent Haven ConVENTion for the first time! Max Fulham, performer on the International Show said, “This was my first Convention and having watched videos and looked at pictures of this wonderful event for so many years I had incredibly high hopes. These high hopes were more than met and I had an absolute blast.” It was indeed a ton of fun. Teri Foltz, another red-dotter, came to the convention from the perspective of writing comedy with her background as a script writer and stand-up comic. She said, “This was the friendliest convention I have ever attended. Everyone is there to have fun!” This year saw some international firsts with two women coming from Slovenia and Albania. Mark Trevor Ranum from Wisconsin remarked, “The red dot was wonderful, and you really felt welcomed.” 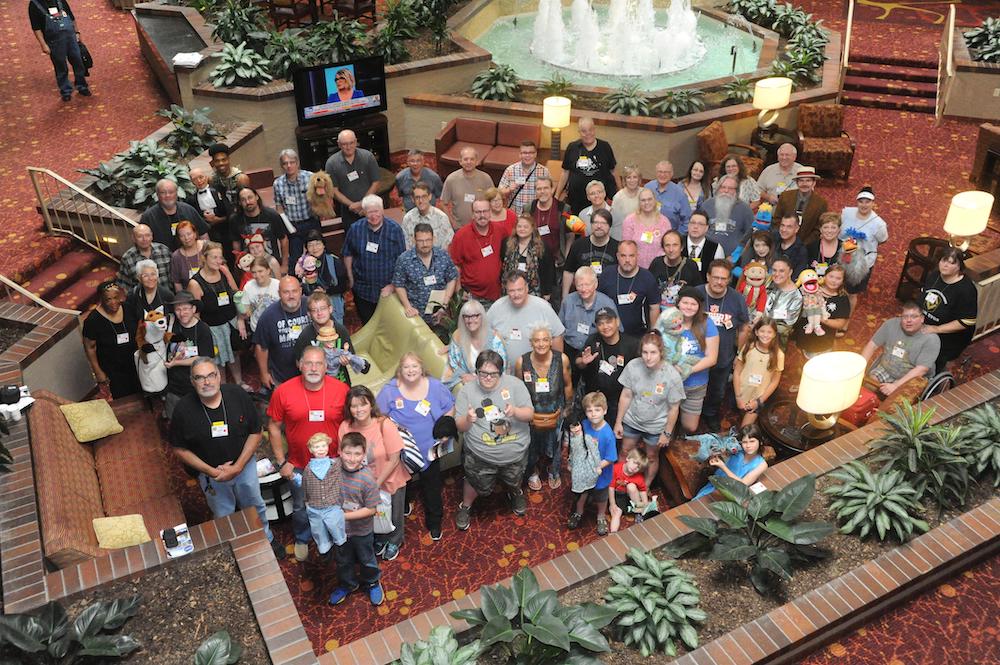 The Convention does welcome people from all kinds of backgrounds, ages, and experience levels. Not everyone is a ventriloquist, but most are. Many are just starting out of doing vent and puppeting for fun Some attendees are semi-pro and starting to earn money at gigs, and the professionals are there to share their experiences and keep improving their craft as well. All together everyone celebrates the wonderful art of ventriloquism. Stevo Schuling of Germany and emcee of the International Show reiterated this truth, that so many ventriloquists are isolated at home with no ventriloquists nearby but at Vent Haven it’s like, “Join the fun! Join the club!” Everyone who attends is part of the ventriloquism family. 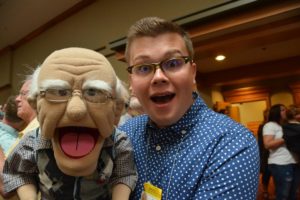 Max Fulham from the UK

Max Fulham from the United Kingdom also shared, “I really felt the Convention has events for all levels too from beginners’ classes to panels where even the most established professionals can listen to the approach and experiences of others.” In Tom Crowl’s Vent 101 session, he defined ventriloquism as creating the illusion of life and shared the four key points to achieving that end. First, obviously, is talking without moving your lips, which is where a lot of new vents start and some live for a while, but there is so much more to it. Second is having a totally different voice for the puppet. The third key point is keeping the puppet animated (more about Barry Gordemer’s Mastering Soft Puppet Manipulation later). Finally, creating the illusion of life is dependent upon the vent and puppet having a believable conversation. It sounds so easy, but each point presents its own challenge. Everyone at the convention was there to dig in and learn how to improve their craft. 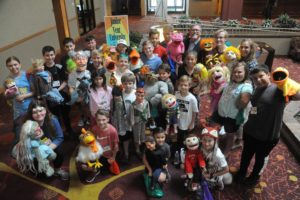 This year saw 22 kids attend Junior Vent University led by Lynn Trefzger, Al Getler, and Jeff Goltz. The kids were working and having so much fun that they didn’t even stop for a snack! Mark Trevor Ranum commented, “Seeing little kids running around with figures warmed my heart, and for the parents who got their kids there, that is dedication.” Jesse Smith, a junior from Huntersville, NC attending his fourth convention, performed on Junior Open Mic. When asked about performing, he said, “Fun. I like hearing the audience laugh. The feedback from the panel was reasonable and helpful.” 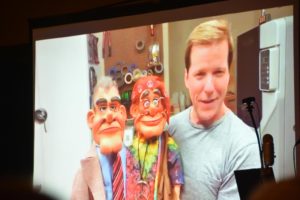 Something new and different this year was Jeff Dunham did his annual lecture remotely via live broadcast from his home! Due to his upcoming Netflix special, Jeff was unable to get to Northern Kentucky; it was only the second convention he’s missed in 43 years, the last being in 1977, but he still found a way to be a part of the festivities. Jeff shared interesting things that he couldn’t have shared if he had been there in person. The group was treated to demonstrations of his McElroy figures Ollie and the Umpire, with Jeff even taking the back of Ollie’s head off to show the mechanisms. He talked about his comedy writing process a bit and showed the vents his workshop with his latest character, conjoined twins Rich and Happy, one’s on the left, one’s on the right…literally and politically. The tension makes for great comedy. Throughout the session, Jeff answered questions from conventioneers and brought Walter out at the end. 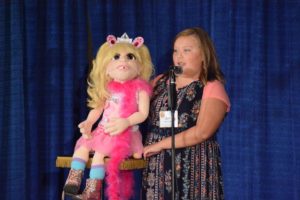 Vent Haven provides lots of opportunities for vents to perform, from Open Mics with feedback to stellar evening shows to General Open Mics late into the night. “The shows ran the spectrum which was comforting,” said Mark Trevor Ranum. He commented on someone in Senior Open Mic who lost his place and how that performer was able to ad lib and still get laughs. He said it gave a sense of confidence. Teri Foltz shared, “Open mics were fun to watch, and I loved hearing the gentle but insightful feedback from the three professionals.” Plus, attendees got to see some different types of vent performances like Mark Hellerstein, September Cardiff, and Kellie Haines who primarily perform for children’s audiences.

A highlight for many was the outstanding International Show Friday night. Closing act 19-year-old Max Fulham “was brilliant” said Ranum. He opened with a headless puppet named Ed, later gave him a head, and then switched out eyes, nose, and ears for funny bits with his quick wit. The act was very current, exciting, and fresh. The audience was also surprised by an unexpected appearance of Ronn Lucas at the end, using the microphone and kazoo to wow the audience with his masterful technical ventriloquial skill. 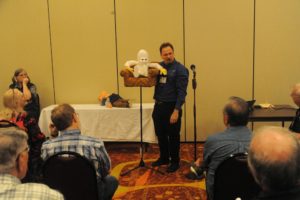 Another strength of the Vent Haven Convention is the learning opportunities that Mark Wade puts together in the schedule. A standout lecture this year was Barry Gordemer’s Mastering Soft Puppet Manipulation. Barb Phoenix commented, “It gave me new insights – especially on using the neck and different head movements to convey emotion.”

Dan Horn’s Professionalism was also touted as one of the best. Dan opened with a rare recording of a little know record called Jimmy Nelson’s Instant Professionalism. The familiar voice of Jimmy and Danny came on except every time the word ventriloquist was used, a dubbed lower voice saying professionalism was inserted. It was a hilarious opening. Dan said the keys to professionalism are in a vent’s appearance, confidence, competence, enthusiasm, poise, reliability, and punctuality.

David Ginn’s Magic with Puppets “was very informative,” according to Hal Crowe. Mr. A’s Strolling Ventriloquism was interesting especially for vents who have never done this type before, showing them some different possibilities. As Barb Phoenix said, “No matter how many times I attend, I never go away without learning something – whether it be about the puppet, doing vent, performing tips, or the business side of things.” 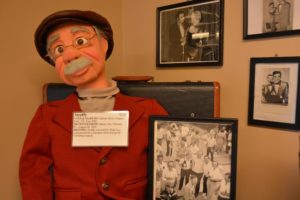 Snuffy from the Johnny Main exhibit

Vent Haven Museum offered conventioneers new things to see with several unique exhibits. Darci Lynne and her family recently donated a back-up Oscar and loaned a back-up Petunia, plus posters, toys, and even the dress Darci Lynne wore on AGT. It makes for a fabulous display that was a favorite in the Josephine Berger Building. The Jimmy Nelson Building housed a special exhibit on Johnny Main featuring four of his dummies that were donated this year by Jimmy Vee and Johnny Main, Jr. Pete Michaels, long time friend of Johnny Main was on-hand to share stories and talk about the exhibit. Also, recently donated was Casey the Duck used by Ken Lucas displayed with the other soft puppets. His act was called Ken and Casey, a man and his duck. The weather this year was very, very hot, but the conventioneers braved the heat to see Mr. Berger’s fabulous collection, adopt and re-adopt their dummies, and spend time among the great vents of the past. 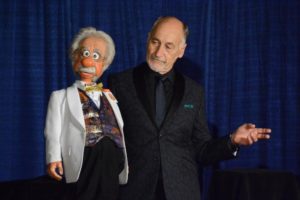 Saturday Night delivered a killer closing show to end an amazing week. Don Bryan and Noseworthy opened the show with lots of laughs. Lynn Trefzger raised it higher with Chloe and her human volunteer bit. Her nine-year old volunteer Brogi was cracking up the whole time which kept the audience laughing! Taylor Mason finished strong with pigs Paco and Raul and new MAT puppet Romeo. The convention closed with another first-time event…karaoke in the Hospitality Room. A big thank you to whomever set that up because it was a ton of fun! “The last night, I thoroughly enjoyed the karaoke and I saw such support for each other. No competitive spirit – just a love for the craft of ventriloquism,” shared Teri Foltz. It’s what truly defines the Vent Haven Convention.

No convention is complete without giving some shout outs to the unsung heroes of the event…people working behind the scenes. Jody Wade, Ruby Groves, and Linda Truman do a fantastic job getting people registered and being the first friendly faces the conventioneers see. Marilyn Pakarklis and her Hospitality Committee work the doors, remind people about cell phones, and generally help everyone to feel welcome. Tom Crowl, Ken Groves, Dave Carr and his crew keep the stage running smoothly while Virginia and Wally Petersen and Mark Truman run the sound tech. Mary Ann, Melissa, and Wayne Taylor organize the dealers and are always on call to let someone in to get to their table. Chris and Mark Donahoe run the Hospitality Room which is where so many connections and laughs are made. Lisa Sweasy gets Vent Haven Museum ready and is the keeper of the history of this amazing art. Phillip Jones and David Crone capture it all on film for generations. As you can see, Executive Director Mark Wade assembles a great staff who make it all go smoothly. 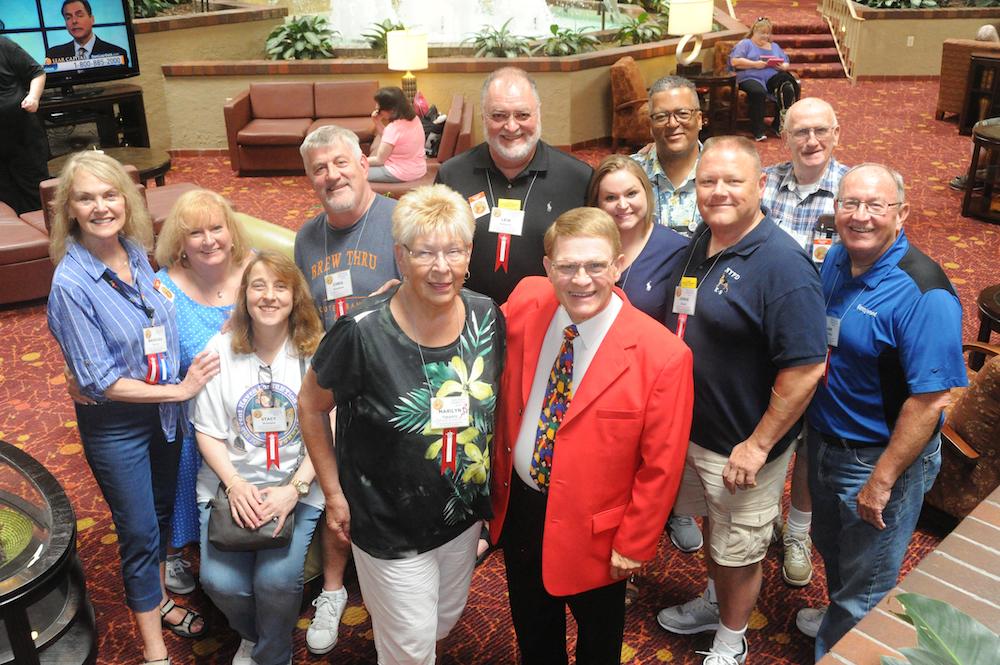 Some may ask the question, “Why should I attend the Vent Haven Convention?” Max Fulham says, “The Convention provides a genuine safe creative space for people to give it a go which I think is so key and whether they are a hit or whether things don’t go quite to plan, they are a champion just for getting up.” Fridolin Kalt aka Calindo from Switzerland says, “The convention gives new ideas. The best further education. The convention is an inspiration for ventriloquists.” 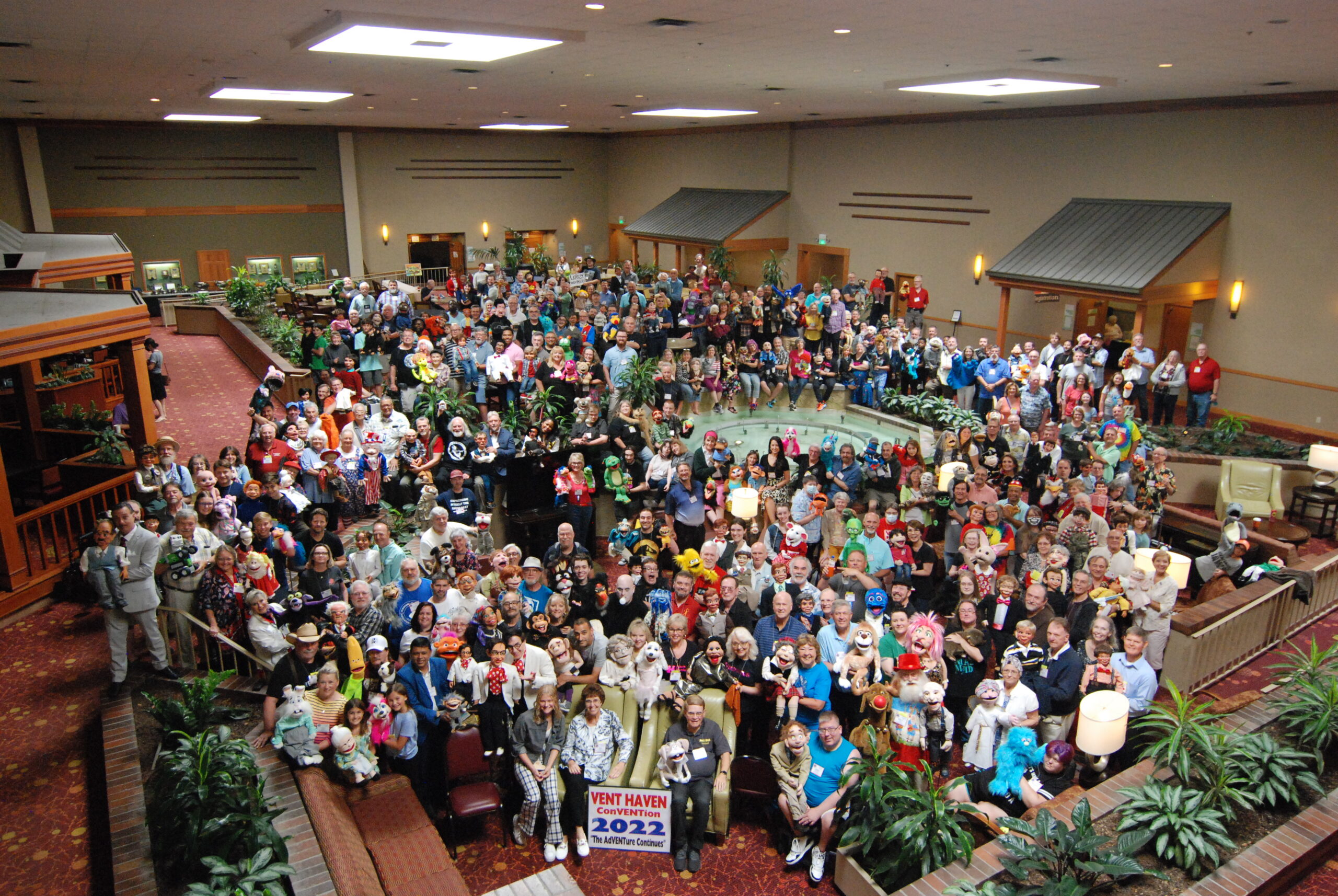